Project-Based Learning:
The Cure for the Common Education

by Shannon Elders, Head of School
(selders@fwacademy.org)
Why is Project-Based Learning (PBL) such an important part of our school? Because it's a powerful teaching tool, full of student-driven and authentic learning. The benefits of PBL are something our faculty has known for years and new studies are currently proving.
Don’t just take our word for it! Here’s what others have to say:
https://www.forbes.com/sites/michaeltnietzel/2019/10/29/new-strong-evidence-for-problem-based-learning/?sh=9b911466ab80 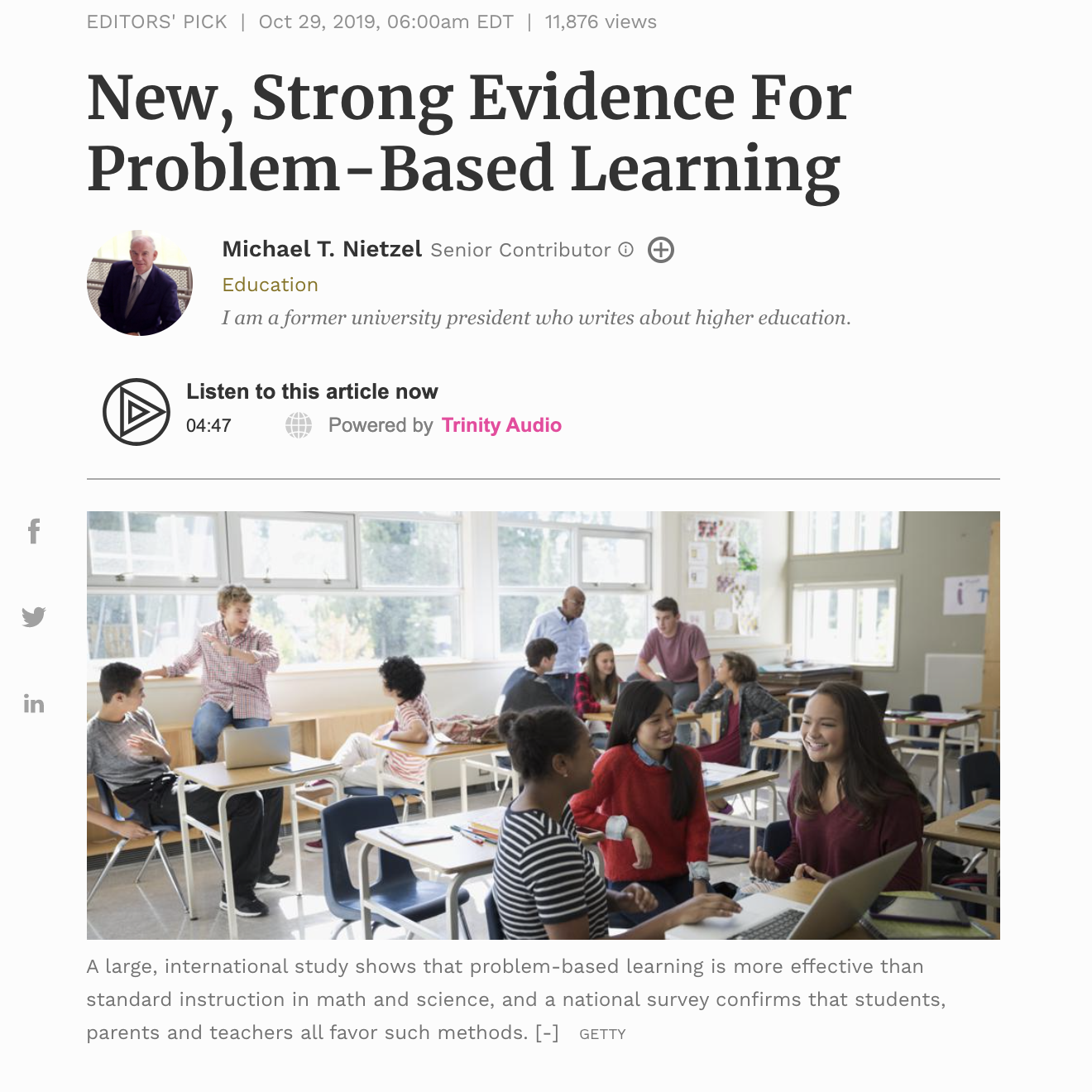 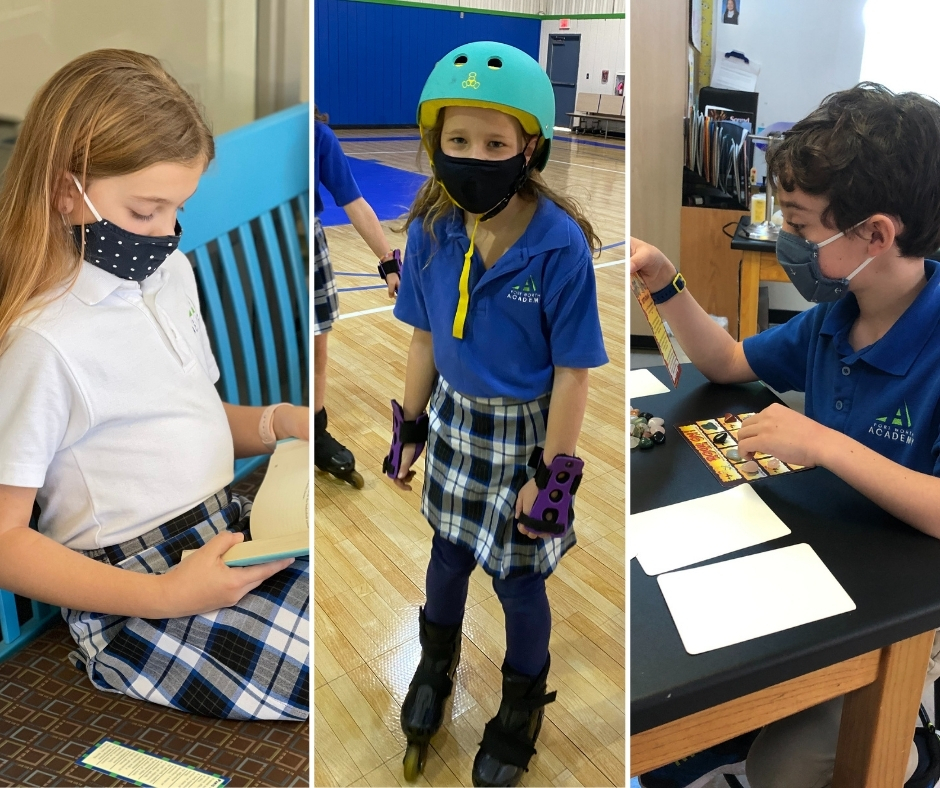 I once gave a tour of Fort Worth Academy to a mother of a second grader from an area public school. The mother cried during the tour when she saw how happy the children were as they completed a learning activity. She shared that for the past few weeks her daughter was having to complete practice tests and would come home from school feeling defeated and saying that she was stupid. She said, “I feel like we’ve lost her. She was so creative and confident, and then it was just gone.”

Why do we induce such anxiety and stress by focusing on preparing and conducting testing, when students could be engaged in thoughtful problem-solving and learning? Spring should bring thoughts of rejuvenation and relaxation to mind. However, for many families, the arrival of spring brings with it feelings of stress and anxiety as students gear up for end-of-year standardized testing. Standardized testing has been a long-standing debate, with both supporters and critics providing evidence as to what they believe is best for students. This year, given the lengthy school closures and lack of in-person instruction caused by the pandemic, the spotlight has been put back on standardized testing, as states are grappling with the decision if they should even give these arduous tests at all.

Because Fort Worth Academy is an independent school, we have the luxury of engaging students in real world problem-solving throughout the school year. We don’t “stop” teaching in the spring to get ready for standardized testing. Rather the spring is when we continue learning new concepts and accelerate the learning process by putting into practice many of the skills the students have gained throughout the year.

Paul Tough, author of the book, How Children Succeed: Grit, Curiosity, and the Hidden Power of Character (2012), describes how current research and evidence indicate noncognitive skills (human attributes) are what matter in predicting an individual’s success. In Crossing the Finish Line: Completing College at America’s Public Universities (2009), the authors argue that: “except at the most highly selected public universities, ACT scores revealed very little about whether or not a student would graduate from college. The far better predictor of college completion was a student’s high school GPA.” They go on to say, “In our view, high school grades reveal much more than mastery of content. They reveal qualities of motivation and perseverance – as well as the presence of good study habits and time management skills – that tell us a great deal about the chances that a student will complete the college program” (Bowen, McPherson, and Chingos, 2009, as cited in Tough, 2012).

In Kate Rodriguez’ article, Irreplaceably Perfect (2017), top leaders and CEOs share the qualities they are looking for in their employees. Richard Branson, legendary entrepreneur and founder of Virgin Group, shares “The first thing to look for when searching for a great employee is somebody with a personality that fits with your company culture. Most skills can be learned, but it is difficult to train people on their personality.” Sheryl Sandberg, COO of Facebook, looks for someone with a “growth mentality, always brainstorming new projects that can take the company forward in new ways.” Sara Blakely, founder of Spanx, Inc. is looking for someone who is “scrappy, who sees life as a glass half full.” As you can see, these leaders are not interested in where one scored on the bell curve. Rather, the human attributes, such as resilience, optimism, and a growth-mindset carry far more weight.

Just placing an individual on a bell curve is not going to make them more successful. On the other hand, there are assessments that can be valuable tools when used correctly. Formative assessments are necessary for improvement and can help foster the human attributes we are seeking to bolster in our students, and leaders in education should work with their teachers in using effective assessments that engage their students and measure true progress.

As a successful professional, at no point in my career has anyone asked me what I scored for the math section of my fifth grade state-mandated standardized test. Moreover, no one has asked what I scored on any of the standardized tests I took over the years, not even college entrance exams. This spring, will your children be riddled with anxiety as they prepare to find their place on the bell curve, or will they be cultivating the human attributes necessary for success?

Fort Worth Academy
0 weeks ago
This year's William M. Broderick Leadership Award was given to Ryan King in recognition of his leadership skills and contributions to the FWA student community. Former Head of School William Broderick joined Head of School Shannon Elders at graduation in presenting the award. Congratulations, Ryan!
View Post

Fort Worth Academy
0 weeks ago
Get to know the amazing students we are about to celebrate at graduation tonight! https://vimeo.com/551931544
View Post